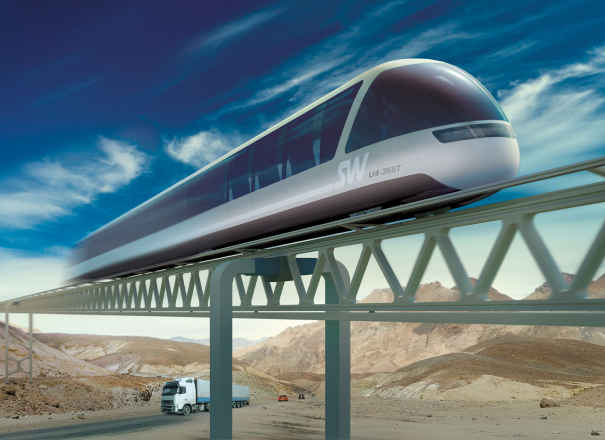 In September of this year, there is planned the long-awaited premiere in Berlin: the SkyWay high-speed module, which is capable to reach speeds of up to 500 km/h.  The novelty is unique in many ways and even now, when it is little information about it, comes as a surprise.

High-speed passenger transport seems to be usually a train with a number of carriages or an airplane that accommodates 250-300 passengers.  This configuration looks reasonable both, in terms of system performance, and in terms of its cost-effectiveness.  However, it turns out that if you change the approach to the organization of passenger traffic, you can reconsider the established norms,  creating vehicles of small capacity (6-8 people) and at the same time, making the trip not only comfortable, but also more affordable.

The design of the SkyWay high-speed transport systems allows to organize the traffic of modules with an interval of up to 2 seconds. With the capacity of each module of 6 people, it is possible to achieve a ridership of up to 500,000 passengers per day in two directions, which is more than enough for the absolute majority of cases. At the speed of 500 km/hm, the distance between the modules will be approximately 300 meters, which is quite acceptable from the point of view of safety.  To make this clear,  you can imagine an autobahn, on which cars move at the same distance from each other.

The average cost of the module during mass production will  approximately be equal to the cost of a car, since the SkyWay high-speed vehicle has the same set of components:  engines, a small battery to travel 100 kilometers in case of breakdown, interior, air conditioning.  In calculating the fare per passenger, this makes SkyWay much more efficient than a high-speed train, each carriage of which costs about 5 million Euros and accommodates 50-60 people.  If we divide the cost by the number of seats, then in the case of a high-speed train, we get 100,000 Euros per passenger, whereas in the case of a car and SkyWay, the price will be only 5,000 Euros per person at a vehicle price of 15-20 thousand.  Thus, SkyWay at smaller sizes can be 20 times more efficient.  But this is far from being the main thing.

The main costs of moving are energy and fuel costs.  The SkyWay's high-speed modules, due to their exceptional aerodynamic characteristics, are unparalleled in this respect.  The expected fuel consumption of the new high-speed six-seat unibus is about 8 liters per 100 kilometers distance in gasoline equivalent.  If we recalculate this for the number of passengers, we will get 1.4 liters per passenger per 100 kilometers, which is about 4 times less than for the best passenger planes.

SkyWay  is a system of trestle type.  This is an association with one extremely important fact: in many cases small in terms of space and size modules are more preferable.  The point is that such a configuration of the rolling stock makes it possible to reduce the material consumption, and hence the cost of the flyover.  And everything is explained quite simply.

Any overpass bends under the load.  The bigger the load, the more the overpass bends, hence, it should be made proportionally heavier.  The most expensive in trestle transport is the trestle itself (up to 80% of the project cost). If you increase the module's weight by 2 times, then the overpass will also cost more for each kilometer.  The ridership of 500,000 passengers per day is unthinkable for most targeted projects, though it can be achieved by transport modules with a capacity of 6 people in each  module... Why go for? Time itself dictates fashion for miniaturization.  World giants of the industry strive to make their gadgets both, as efficient as possible, and as small as possible.

The visualization of one of the concepts of "trains of the future", which was created in the middle of the 20th century

The premiere of the SkyWay high-speed module in Berlin undoubtedly prepares a lot of  surprises and suddennesses.  But it is now clear that the string transport cannot be measured by the old framework and standards. Today, it demonstrates a fundamentally new approach in everything: in logistics, ergonomics, energy, automation.  Tomorrow, SkyWay itself can become a standard, a model, which others will try to follow.