Innovations in transport: the technologies that created the present

The wheel, domestication of horses and sailing ships helped our ancestors to move beyond their original areas. In the 19th century, steamboats and railways expanded the range and speed of human travel. The car owned the 20th century and allowed people to reach for the stars.

During the millennia of its history, mankind has created numerous technological innovations. Today, we will talk about how these innovations have transformed modern transport and how they will help to further transform it in the near future.

The innovations that have created transport of the 21st century

The history of transport totals to more than 5000 years. In spite of that, there were only a few fateful transport discoveries before our era. The most important of them was the use of wheeled vehicles. According to various sources, the first wheeled wagons appeared about 3500 years BC in the area of Mesopotamia (present-day Iraq and Syria).

Here, there was born one of the oldest civilizations of mankind, where together with major cities, trade connections began to appear, for which traction transport became the first transport innovation.

Over the next millennia, several other important innovations in the transport sector have taken place: riverboats were invented; the first ships left the shipyards in Egypt; and the first paved roads appeared in Europe. In 312 BC, in Ancient Rome, there was built the Appian Way – one of the most known paved roads of antiquity.

Two of the three main transport innovations of the Middle Ages were made in China, where a compass and a rocket were invented. In the same period, in Andalusia (modern Spain), the inventor Abbas ibn Firnas conducted the first manned wing flight and became the inventor of the hang glider.

The most important innovations in transport began with the Renaissance and great geographical discoveries, when ships were able to cross not just seas, but whole oceans to reach the far shores of the planet.

The first revolutionary discovery of the transport industry can be considered the invention of the steam engine in the 16th century, which helped to abandon the tractive force in personal and public transport. The principle of steam engine operation is simple: water is heated, steam is formed, steam presses the piston and the piston drives the connected mechanisms.

In 1769, French engineer Nicolas-Joseph Cugnot launched the first self-propelled transport with the help of the steam engine, a prototype of the future steam locomotive and car.

Over the next 100 years, scientists have created almost all types of transport familiar to modern man:

The 20th century was innovative from a technological point of view and laid the foundations of modern society. However, this century's transport developments were aimed at improving existing transport rather than at inventing a new one. For example, the internal combustion engine was created over a hundred years ago, but since then, it has changed considerably. The modern Mercedes 500 has a much smaller engine, but is 10 times more powerful than the Mercedes 35, 1901 version.

In the 20th century, only one fundamentally new type of transport was created &ndash space transport, which can also be called the main transport innovation of this century, along with other important discoveries: the flight of supersonic aircraft, launching submarines on a nuclear reactor and trains on a magnetic cushion.

All these innovations have created modern transport and, unfortunately, have caused new problems: accidents, toxic emissions and traffic jams. Today, engineers are trying to understand how to save the best from these discoveries, but to get rid of their shortcomings.

The innovations that everyone is waiting for

Let us talk more about them.

Fiction writers of the past dreamed of a transport that could rid the driver from having to monitor the road. Today, engineers are close to this possibility.

To understand how close we are to this goal, engineers distinguish five levels of autonomy for transport. On the first level, transport cannot make independent decisions about traffic on the road, on the fifth level it has full control over traffic, taking into account the situation on the road.

There are different assumptions when a completely unmanned vehicle will appear.

Some experts argue that by 2040, 75% of transport will have been unmanned. Elon Musk, for example, announced the creation of the unmanned taxi service by already 2022. But many experts question that statement because there is no regulatory legislation.

However, there is no doubt that it is in the 21st century that we will see transport that drives to  our home, all by itself, takes us to work and heads to pick up the next passenger. The second transport innovation follows from that.

In the coming decades, one of the main innovations in the transport industry will be the abandonment of personal transport in favour of car sharing and, consequently, the development of related technologies. The number of private cars will decrease, people will switch to rental and on-call transport more and more, public transport will become more comfortable..

Today, there are given different predictions regarding the time when people in the cities will move away from owning private transport. For smaller cities like Helsinki or Zurich, this period is 5-10 years. In larger cities like Sydney or San Diego, it will be another 20-30 years before the vast majority of people will switch to public transport and car sharing.

One of the modern transport innovations is the development of architectural and urban planning solutions, and the unification of different modes of transport in combined interchanges, where passengers can quickly transfer from urban to intercity transport.

One of the promising projects in this direction is Hyperloop vacuum trains capable of speeds exceeding 1000 km per hour. It is expected that future Hyperloop stations will become major transportation hubs where passengers will be able to move from intercity transport to light, urban transport.

If you look at the development of the car over the past 100 years, you can see how much it has changed externally. In the field of motor transport, companies have always tried to win the trust of consumers and make their product different from the work of competitors. If you look at the car ranges of the last 10 years, you can see how similar they become.

The tendency to a unified, single type of transport comes from the fact that in production, the technical filling of the car is a priority, not its design. And it is in this sphere of technical filling, that automobile concerns will compete.

At the same time, passengers also wait for a unified transport, so that in the future, they do not have to choose between BMW, Tesla and Mercedes. It will be enough to choose a destination and comfort level.

It will take dozens of years to implement these innovations. We see the rudiments of their realization though, already today. The main thing that unites all these ideas is the desire to simplify the ownership and use of transport, i.e. To save passengers from endless expenses on car maintenance, and the state from expenses on development and construction of expensive roads. And it is in this direction that the SkyWay string transport is ready to offer its innovations.

All technological innovations of the SkyWay transport are connected with the mentioned directions: infrastructure development, change of principles of transport ownership, its autonomy and unification.

Autonomy: what does SkyWay see?

Unlike a car that needs to monitor the situation on the road and to make decisions about overturns and turns, for the SkyWay transport, it is much easier to achieve autonomy.

The string transport is moving on a given flyover track, and the main thing that it needs – is to react to objects on the way. Today, the unmanned SkyWay transport has technical vision, which can allocate the chosen objects and brake in the event of a possible collision with them. 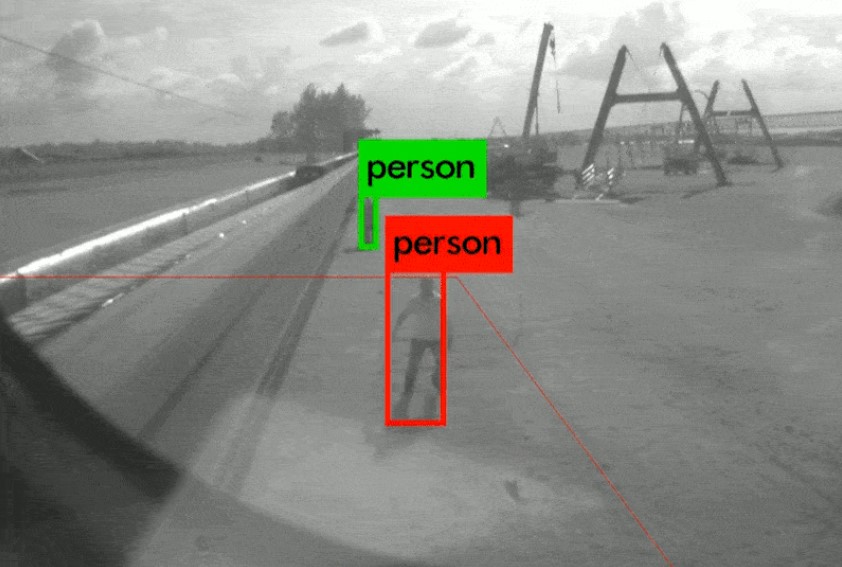 Unification and usage principles: SkyWay for all 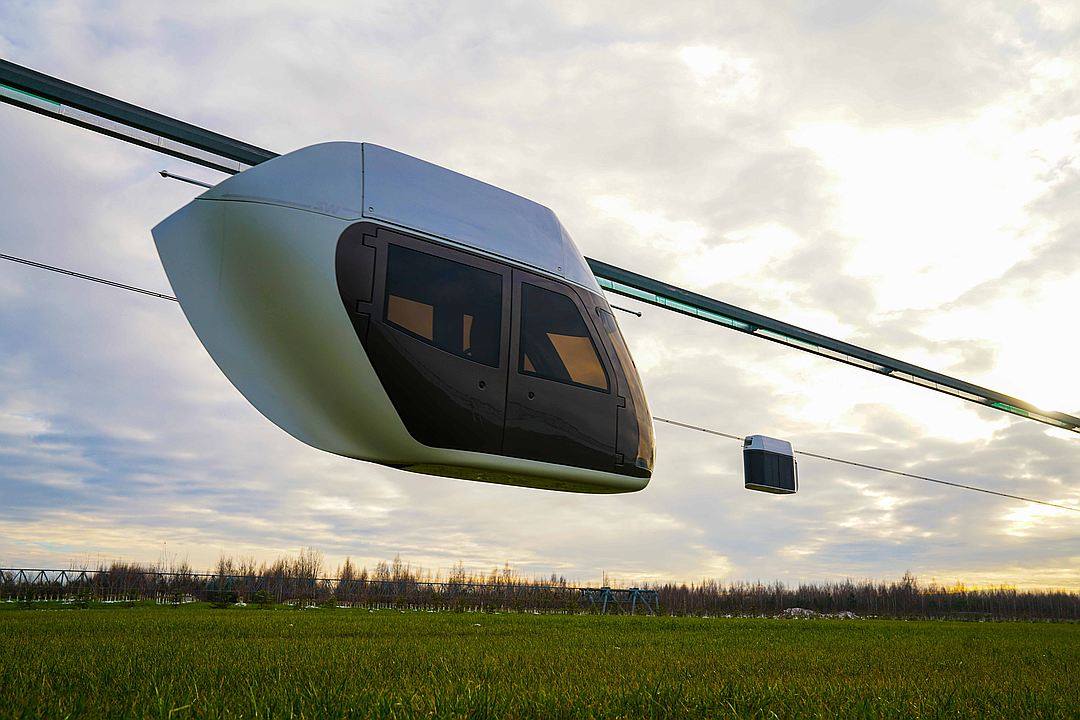 Innovations in public transport has never been a priority of engineering thought. SkyWay managed to combine the advantage of public transport affordability with the comfort of personal transport by means of infrastructure. 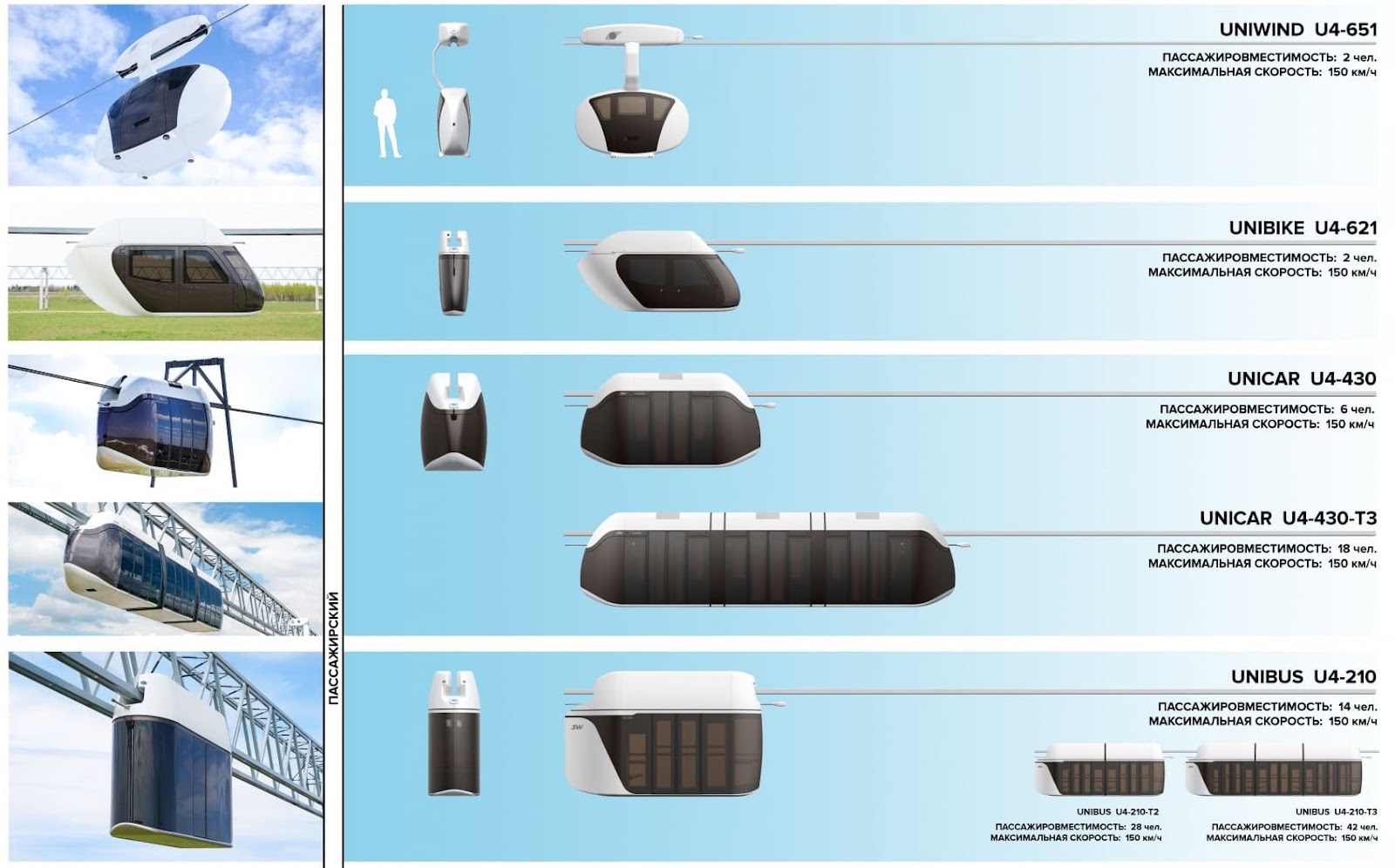 Part of the SkyWay urban transport range. A total of 11 modes of transport have now been developed

This approach also speaks for the unification of the transport. There is no need to invent a new design for a vehicle in a series. It will only differ depending on the tasks facing the transport. For this reason, the focus is immediately on technical features: smoothness, speed and safe driving.

Infrastructure: SkyWay at all levels

Unlike the car, SkyWay is not just transport, but a set of infrastructure solutions that helps make travel comfortable and safe.

The SkyWay technology provides models that can accelerate up to 150 or even 500 kilometres per hour. And most importantly: all these modes of transport work in the territory of one station, where you can quickly move from intercity to urban transport and get home. 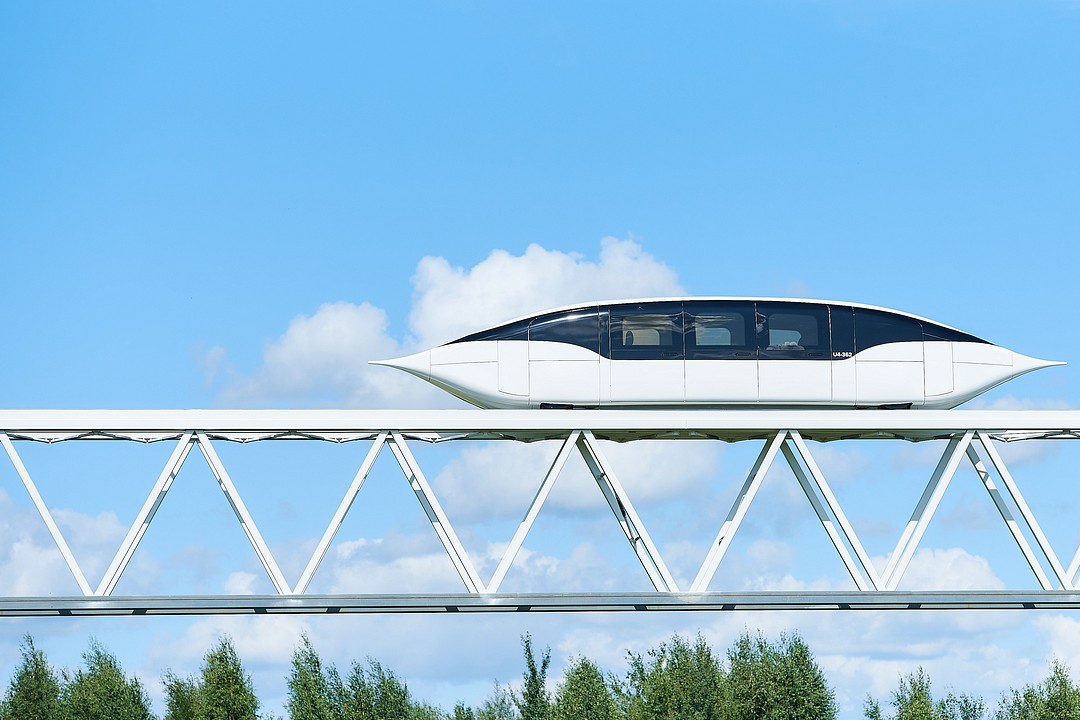 The advantage of SkyWay is not just in the "invention" of innovations, but in the fact that it managed to collect all the current innovations in one transport. To make it autonomous, comfortable and not requiring special knowledge for use.

The bottom line: what can you expect from transport innovations?

The transport we are used to has been shaping up for thousands of years. But we have received the main historical innovations in the last 100 years. Even more innovations await us in the next 100 years.

The main thing that passengers expect from innovative transport is the ability to move independently on the road, getting rid of the need to control it, making it universal and affordable. Today more than ever, we have come close to this opportunity. And one of the opportunities to get it all together is already offered to us by SkyWay.

Andrew Yakomaskin
Share:
Previous blog
Transport today
9662
On the strings, in the air, inside the pipe: what the trains of the future will be like
Order a call back